One of the most recognizable parks in the world is Park Guell, a public park system which is composed of architectonic elements and gardens. Located on Carmel Hill in Barcelona, Spain, the park was commissioned by Eusebi Guell, one of Gaudi\'s best friends, for a Barcelona aristocracy, hence the name. The otherworldly park was designed by Antoni Gaudi, the face of Catalan modernism. It contains amazing stone structures, fascinating building>, the park finally opened in 1926 and became a UNESCO Heritage Site in 1984. Gaudi was an artist that was strongly influenced by natural shapes and this is evident in his works. Hypnotic and magical, Park Guell is on top of every tourist's list when visiting the city of Barcelona.

The park is situated within a natural park. Guell and Gaudi envisioned an organized grouping of high-quality homes, complete with the latest technology and advancement to ennned 60 villas. Gaudi himself stayed in one of the two houses designed by Francesc Berenguer. The house has since become a museum showcasing some of Gaudi's best works. 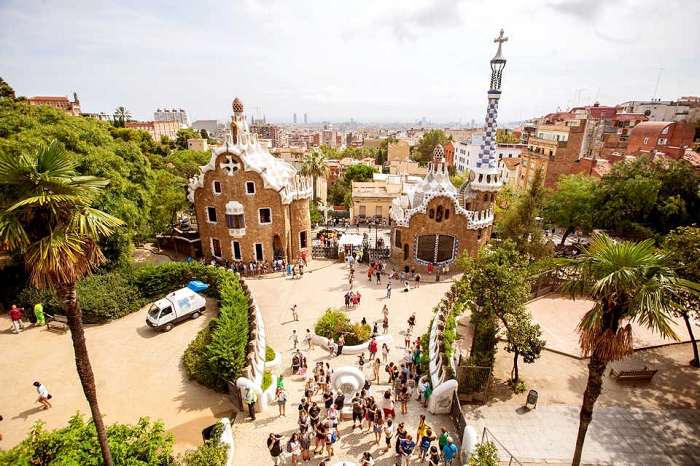 The below table includes a brief description of various handpicked Park Guell tickets & skip the line guided tours of the Park Guell. They're based on users reviews, cost, customer experience as well as all the best ways to see the famous Park Guell sight. 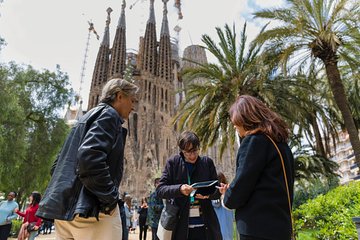 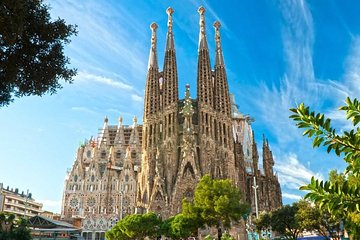 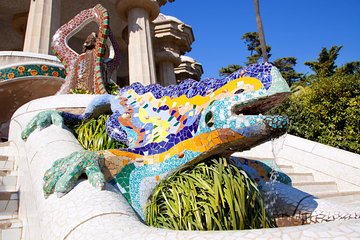 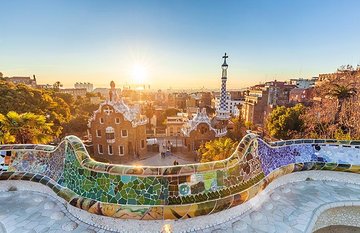 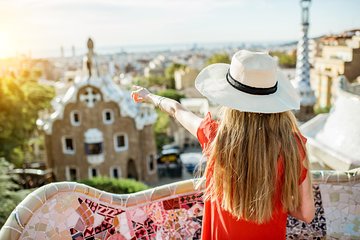 5. The Most Complete Full Day Private Tour with Sagrada Familia and Park Guell 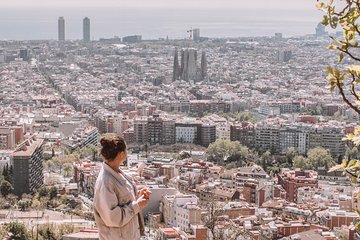 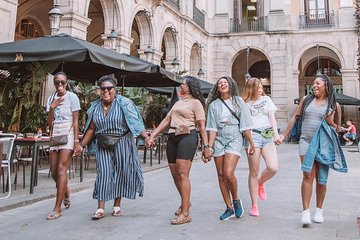 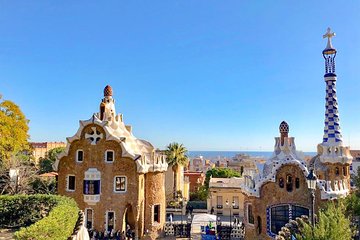 Design and Details of the Park Guell

Park Guell is approximately 45 acres in size and it is divided into different sections. Due to its sheer size, tourists can easily get lost in a maze of art, creativity and colors. It is important to know or at least have an idea of the park's sections and what is to be found in these various sections.

The park has multiple entrances, but the main entrance is located on the south side, on Carrer d'Olot. From there visitors can get amazing vistas of the stairway with the hypostyle room. The park's wall is made of rustic stoned topped with medallions bearing the name of Park Guell, and the ceramic tiling. The iron gates do not form part of the original plan. It came from Casa Vicens and is designed in the shape of palm leaves.

There are pavilions on both sides which form the porter's lodge. The one located on the left is actually used as a porter's lodge and it comes with a waiting room and a telephone booth. On the other hand, the one on the right was once the porter's residence, now a part of the Barcelona History Museum. Both of the pavilions have exquisitely designed roofs built with traditional Catalan clay tiles covered with a mosaic of tile shards. 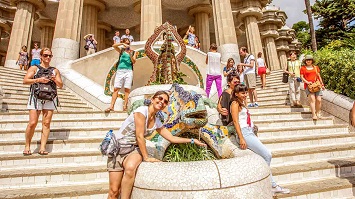 There is a twin flight of steps soaring up from the entrance esplanade. Flanked by two walls with merlions that form terraces under which there are two grottos. The one located on the right has a conical central column and was used to keep horses. The stairway has three sections, along which water runs from a fountain and once supplied from the tank under the hypostyle room.

There are a few capricious shapes like goblins on the first landing and halfway up the steps you will see the emblem of Catalonia and farther up is the dragon or salamander, one of the most popular images of the park that is covered with decorative tile-shard mosaic. On the last flight of steps is a Greek theatre shaped bench sheltered just under the hypostyle room.

The Hypostyle room is where the entrance leads to. Made of 86 striated columns which had the Doric order as inspiration. The outermost columns slope in an undulating movement as opposed to the classical composition and they lean in like bent trees giving the composition a naturalistic appeal.

The Placa de la Natura or Nature Square is where plays, events, and festivals have taken place. Half built into the rocks of the hillside itself, it is supported by the hypostyle below. The square looks like as if it is going to reach towards the ocean. People often think that they can simply just walk right out to the ocean and touch it. 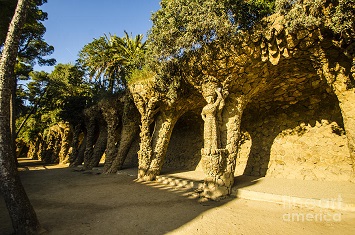 Situated on the eastern side of the Greek Theatre, the Laundry Room Portico is guarded by an iron door. It is where the gardens of Casa Larrard used to be, the home which Guell adopted as his own, which had been a school since 1931. The route takes you to a pleasant stroll through a pine grove with the portico backing onto the retaining wall constructed from unworked stone. The portico has a shape of a great wave atop slanted columns with a buttress. 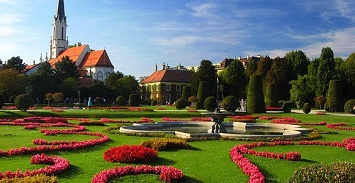 The Austria Gardens used to be just bare plots in the estate but when Park Guell was turned into a public park it was used as a municipal plant nursery. This area has a completely different look from the rest of the park and it got its name through a donation of trees made by the Austrian government in 1977. Two of the most famous homes in the park can be seen from the gardens, one planned by architect Juli Batllevell and another by Frances Berengeur which has been converted to the Gaudi House Museum. 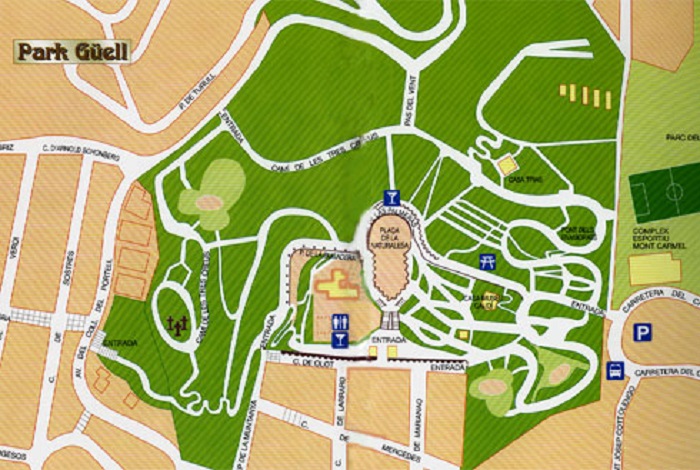 Running east towards the Carretera del Carmen exit, is the Pont de Baix, one of the first network of viaducts which connect various parts of the park. Gaudi originally planned three different viaducts each with a width of five meters, leading carriages to the main entrance of the Carrer d'Olot up to the high part of the estate.


What to Expect from Park Guell

Before heading to Park Guell, there are a few things which you need to be aware of to avoid disappointment. Only four hundred tickets are sold every half hour and the entry time provides a 30-minute grace period and once a ticket has been validated, you will not be able to leave the premises and enter again using the same ticket. It is a wise decision to book tickets online because not does this save you money, there are also many options online such as skipping the line so you don't waste your precious time jostling for a place in one of the world's most popular park.

A trip to Park Guellwill awaken your senses and might even bring out the artist or the art admirer in you. Compelling, intriguing and undeoubtedly beautiful, his creations stir up emotions and are masterpieces to behold.

Plan Your Visit to Park Guell

Just like other popular tourists attractions in the world, Park Guell is visited by millions of people annually. You can expect crowds, noise and people jostling for space while taking Instagram-worthy pictures. It is important to plan your visit so that you can make the most of you time there.

Hit the park early in the morning when there are less crowds. It also starts getting unbearable hot at 1pm in Barcelona, specially from May to October. It can be miserable to wander around the park in the afternoon especially in July or August when summer is at its peak. The park is also less crowded during low season and heatstroke won't be much of an issue.

Refrain from , so refrain from wearing high heels or you will suffer! The park is massive and is set on a hillside which is a challenge to navigate without proper footwear. Wear sneakers or shoes that are not going to kill your feet.

There are few food options in the park so do not let hunger and thirsffered at the park is also very expensive so unless you have plenty of money, it is best that you bring your own food and water. Get some fruits or a couple of sandwiches from a local bakery and have a picnic on the beautiful Undulating Bench that overlooks the city.

Pack up sunscreen and a Hat

It can get really hot in the summer and although the park have plenty of shaded areas, you will have to walk under the bright Mediterranean sun if you want to explore the park fully. Slather on some sunscreen and put on a hat.

Watch your camera and wallet

Any place that is full of tourists is a place full of pickpockets, so be very careful of your wallet and your camera. Keep an eye on your valuables and make sure you have your purse and camera across your chest.

Purchase your tickets in advance

The number of tickets sold daily is limited so make the most of your time by booking in advance and booking skip the line tickets so you do not waste your time. There are various deals online which are a lot cheaper so take advantage of them.