Brimming with narrow winding streets and medieval walls, one of the most historic cities in Spain, Girona, is a sublime ancient city with one of Spain’s last surviving Jewish quarters. It is located 99 km northeast of Barcelona and is the capital of the identically named province.

The painful history explains why this ancient city is still surrounded by high fortresses.

Girona is a popular destination for tourists all around the world, where you can explore the Old and the New city of Girona. Once you are here, you must visit the remarkable landmarks of the city such as the Girona’s cathedral, the Old fortifications, the Collegiate Church or Sant Feliu, the Benedictine church of Sant Pere de Galligants, the Placa de la Independencia, and the Jewish heritage quarter.

For fans of Game of Thrones, take into account that you’ve already seen the grey stone streets of Girona in the city of Braavos in the sixth season.

1.Girona and Costa Brava tour with hotel pick-up in Barcelona 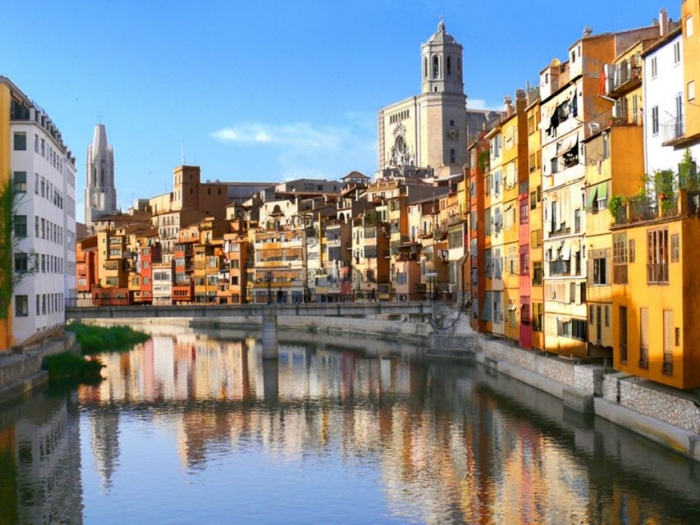 Brightly colored houses, a maze of narrow streets, and the best preserved Jewish Ghetto in Europe are the best options that the stunning city of Girona could offer you on this full-day tour from Barcelona. Built in Roman time, a lot of people wanted to get their hands on this medieval city.

The Girona Cathedral is one of the main highlights that dominate Girona’s skyline, so the only way to get inside it is to climb the staircase to the entrance.

The next stop are the marvelous villages and astonishing landscapes of the Costa Brava. Enjoy the cobbled streets and the best view of the Mediterranean Sea en route to the wonderful village of Pals.

Then, admire the panoramic landscapes of the green mountains and the sheer cliffs in the traditional village of Calella De Palafrugell.

Continue the trip to the ancient Calella and explore the paths that in the past were used by smugglers, fishermen, and watchmen and that show you the way to the most popular beaches. When you are on the beach, enjoy swimming in the crystal-clear sea water. 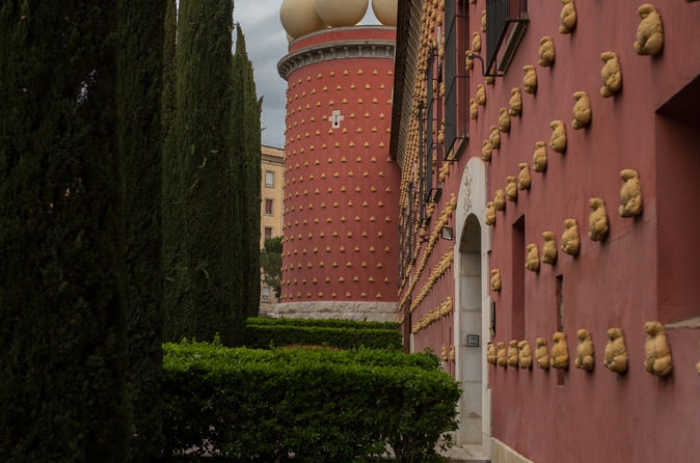 The medieval monuments of wonderful Girona and the fascinating world of Salvador Dali’s surrealism are the best highlights of this one day trip from Barcelona.

When you arrive in Girona, learn more about the history of this splendid ancient city and find out how was the wealth used to build the many Romanesque and Gothic structures in the city. Enjoy the white-painted houses, the narrow cobbled streets, and the exquisite Old Town with its historical charm. Don’t forget to see the Jewish Quarter dating back to the Middle Ages.

One of the main landmarks of the city is the Girona’s Cathedral with its Baroque façade.

Continue the trip to Figueres, located in the north of Catalonia, where you will have an exclusive chance to visit the Dali Theatre and Museum. Explore the three-dimensional room, the Dali Jewish exhibition, the galleries, the collection of his works such as his sculpture eggs, and some paintings in this glorious museum.

Once you are in this city, you can also see other interesting museums such as the Emporda Museum and the Museu del Joguet. 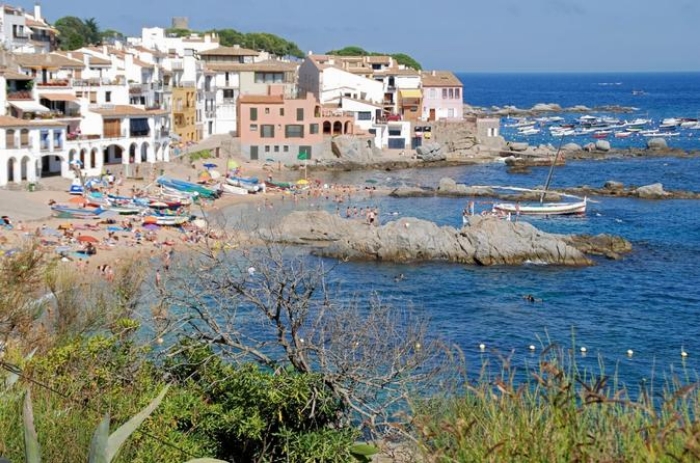 Marvel at the landscape of the Catalan countryside and discover the beauty of Catalonia on this one-day trip to Girona and Costa Brava.

Stop in the medieval city of Girona and see the impervious city walls built by the Romans in the early 800s. On this walking tour you will see impressive architectural structures such as the old Girona Cathedral consecrated in 1038. Enjoy the stay in the Jewish Quarter and visit the Arab Baths.

Continue the trip to the small ancient village of Pals and then go to Calella de Palafrugell, a wonderful fishing village filled with white-colored houses. Here you can enjoy a traditional Catalan lunch in some of the local restaurants at your expense.

Once you are there spend the time to explore the Cap Roig Botanical Gardens, or just go for a swim in the crystal-clear water of the Mediterranean Sea. 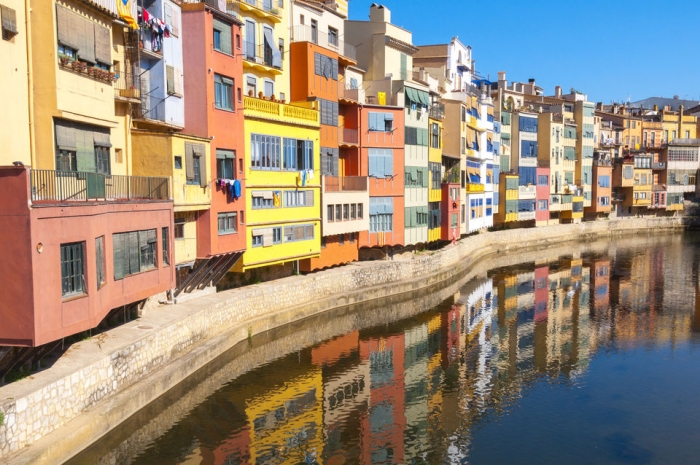 Head to the Montserrat Mountain to see the Montserrat Abbey, and admire one of the best preserved Jewish quarters and the Girona Cathedral on this full-day excursion from Barcelona.

Learn about the history of the ancient city of Girona, strolling the narrow cobbled streets and enjoy the splendor of the medieval constructions in the city.

You will be enthralled by the impressive Jewish Quarter and the architectural charm of the Old Town walls.

The Girona Cathedral is also an impressive construction that you must visit.

Afterwards, the trip will take you high up the mountain hills of Montserrat where you will enjoy the view of the lush nature.

Take a 15-minute ride on a cogwheel train to get to the majestic Montserrat Monastery.

The main reason to visit the abbey is the 12th-century Romanesque sculpture called the Black Madonna, or the Virgin of Montserrat. Hear the myths and legends about this statue, or have a great time tasting liqueurs made by the monks of the abbey. 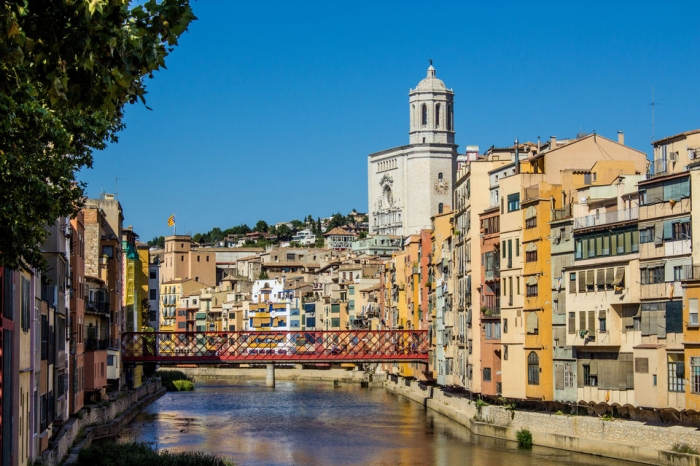 Learn about Girona’s historical heritage and its impressive landmarks like the Girona Cathedral and one of the best preserved Jewish quarters in this half day trip to the medieval city of Girona.

Enjoy the city highlights and breathe the magic of the Old Town’s structures like the Old ancient wall and the famous pastel-colored houses on the banks of the Onyar River.

Hear the tales about the Jewish Ghetto, the best preserved one in Europe with a maze of narrow and cobblestone streets.

At the end of the trip you can stroll along the streets and marvel at the artistic and cultural heritage, or you can visit some of the local restaurants and have a delicious lunch.

So, did you recognize some of the city landmarks? Just in case you didn’t, most of the historical buildings in Girona were used in the sixth season of the hit TV show Game of Thrones.

Things To Do In Girona

Built by the Romans in the early 800s and enlarged in the 14th century, Girona’s Wall is one of the main attractions that is a must-see while you are there. After several restorations, today the Wall is still in a good condition and has the watchtowers with stairways for best panoramic views of Girona’s skyline.

The Jewish Ghetto is also known as El Call and is one of the largest in Spain built around the 1100s. Despite the fact that Jews were expelled from Spain by the Catholics at the end of the 15th century, this quarter is one of the best preserved in the world. This area has a treasure of cultural heritage including secret gardens, stone walls, and the Museum of Jewish History.

A mixture of Gothic and Romanesque style, the Girona Cathedral dominates the skyline of the city. If you want to get inside the Cathedral, you have to climb the long staircase to the entrance and enjoy the view of the city. For fans of Game of Thrones, you have probably noticed that this Cathedral was used in the scenes of season six.

The most popular square in Girona is situated west of the Onyar River in the center of the Mercadal district. Placa Independencia is the heart of everyday life where you can find many restaurants, bars, and also people come here to have a chat. The buildings on the square are dedicated to the people who helped the city during the French sieges and the lovely monument at the center of the plaza is built in their honor.

The Onyar River flows through the heart of the city, the most famous river in the city. The river is spanned by several bridges that give you an amazing view of the painted-houses but the most famous is the Eiffel Bridge, built and constructed by Gustav Eiffel just before the Eiffel Tower.

Designed in Gothic style, the Church of Sant Feliu had been a cathedral up to the 900s. Inside the church you can see the Roman and Christian sarcophagi and the Chapel of Saint Narcissus where the remains of this martyr are kept.

The bathing complex, that actually has Romanesque origins and follows the Greco-Roman traditions, has been outside the city walls until Girona developed around them. It has several sections such as apodyterium (changing room), tepidarium (warm bath), caldarium (steam room), and frigidarium (cold room).

If you are in Girona to stroll the medieval streets, then you should take a long walk through the narrow cobbled streets and enjoy your visit. It’s a real pleasure to discover the ancient walls and the white-painted houses but you can also visit the local bars, restaurants, coffee shops, and small shops.

9. The Museum of Jewish History

Located in the El Call, the museum will teach you about the influence of the Jewish community in the city’s medieval development. The Museum has eleven galleries, including the Synagogue with the 14th-century stone invoking the Psalm of David and a section devoted to Jewish burial rites.

Rated as one of the best restaurants in the world every year since 2011, the El Celler de Can Roca restaurant run by the three Roca brothers has picked up the mantle from elBulli, Ferran Adria’s restaurant. If you are a food lover, you can also visit the El Lleo market where you can buy the same meat and fish that the restaurants use for their meals. Girona is also close to the Emporda wine region and several villages that produce cava.

Craft Beer Tour with a brewery tour and 2 local bars

Three Countries In One Day: France,Andorra,Spain From Barcelona With Pickup

What is the best way to tour outside the Barcelona?

Barcelona day trips are special, professionally-guided tours which are designed to take you on long hour trips outside Barcelona city or sometimes combine various Barcelona main attractions together at a low cost just to occupy your day with fun-filled moments and interesting activities.

How much is a Day tour from Barcelona?

What are the best Day Trips & Excursions tour in Barcelona?

What are the best Half-day tours in Barcelona?

What are the best Multi-day tours Trips from Barcelona?

What are the best Overnight tours in Barcelona?