One of Scotland\'s most iconic landmarks, Edinburgh Castle looms above the city\'s dramatic landscape. It welcomes almost 2 million visitors annually and has its illustrious history on display for people to admire. If you are on a mission to explore the wonders of Scottish history, you should not miss the castle.

One of the most popular tourist attractions in the world, Edinburgh Castle has a turbulent history. The castle has a treasure trove of secrets and plenty of myths and mysteries to entertain you.

Edinburgh isn\'t so much of a city, more a way of life…..I doubt I\'ll ever tire of exploring Edinburgh, on foot or in print.

‘it seemed as if the rock and castle assumed a new aspect every time I looked at them; and Arthur\'s Seat was perfect witchcraft. I don\'t wonder that anyone residing in Edinburgh should write poetically.

There\'s no leaving Edinburgh, No shifting it around; it stays with you, always.

The below table includes a brief description of various handpicked Edinburgh Castle tickets & skip the line guided tours of the Edinburgh Castle. They're based on users reviews, cost, customer experience as well as all the best ways to see the famous Edinburgh Castle sight. 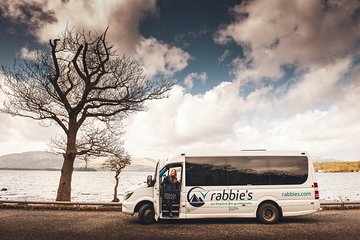 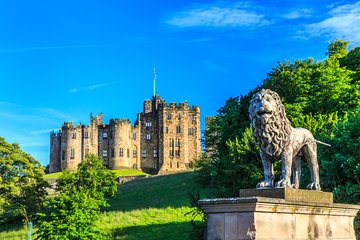 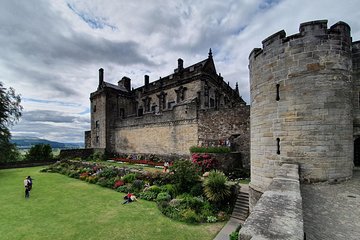 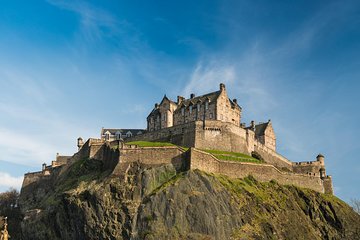 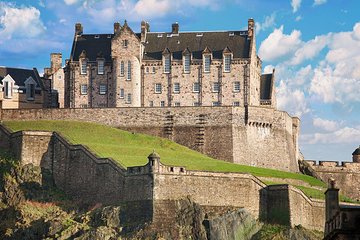 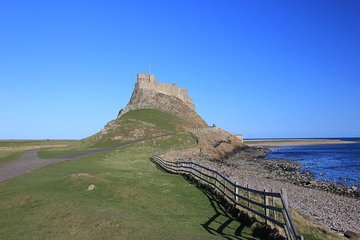 6. Alnwick Castle and the Viking Coast Full-Day Private Tour in a Premium Minivan 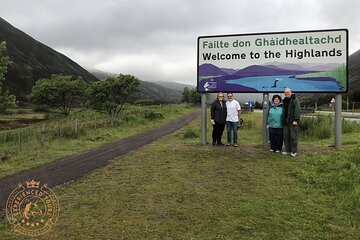 7. The Highlands, Whisky and Castles Private Day Tour in a Premium Minivan

The Highlands, Whisky and Castles Private Day Tour in a Premium Minivan 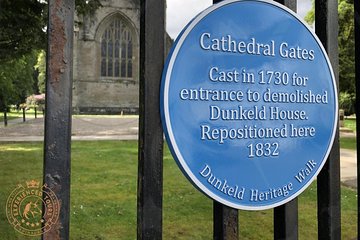 Why is Edinburgh Castle Famous?

One of Scotland's and one of the world's most famous castles, Edinburgh Castle sits high on a volcanic rock more than 200 feet above the city. Up until the 16th century, the castle was often called the “Maidens Castle.”

The castle is famous for its long history and the number of monarchs who have lived in the castle for centuries. The constant conflict the castle was involved in resulted in renovations, on-going repairs, and additions that included the construction of more towers, halls and barracks.

With all the constant work, it is not surprising for the castle to have become such an imposing structure. It has played an important part in military and defensive history of Scotland. Today, it houses the “Honours of Scotland” or the crown jewels of Scotland, It is also an active military base.

Edinburgh Castle has consistently received top ratings in Trip Advisor and is recommended by visitors for people who want to visit Edinburgh and Scotland. Voted as UK's top UK Heritage Attraction at the British Travel Awards, it is also Scotland's number one paid-for tourist attraction.

Edinburgh Castle hosts a myriad of events to showcase its history and tradition to visitors.

Each summer, Edinburgh Castle’s Esplanade is transformed and becomes a unique concert venue. Some artists who have graced the stages are Boyzone, Rod Stewart, Westlife, Lionel Richie, Simply Red, and Tom Jones.

Is Edinburgh Castle Worth the Money?

Edinburgh is a historical and cultural treasure and deserves a visit at least once. At just a fraction of the cost of other tourist attractions, it is definitely worth a visit every penny spent.

Thousands of free tickets for various attractions, including Edinburgh Castle, are given away as part of St. Andrew's Day celebrations.

Can You Walk Around Edinburgh Castle?

Yes, it is possible to walk around Edinburgh Castle, but it is very important that you wear comfortable shoes and clothes to get the best of your self-guided walks on the castle grounds. You may also check Edinburgh city passes which include the castle on their itinerary.

What to Expect from Edinburgh Castle?

Rising up form Castle Rock is the famous Edinburgh Castle. The most visited attraction in Scotland, it is so popular that it can get quite crowded, especially during summer months. There are many things to see at the castle but the most popular are the Crown Jewels of Scotland.

Another highlight in the castle are the royal apartments where various monarchs have lived. A self-guided tour can easily be done by visitors. However, if you really want to get an in-depth knowledge of the place’s history, it is best to pay for guided tours.

There are no facilities to store a range of personal items in the castle. Rucksacks over 30L and suitcases are not accepted in the site due to heightened level of national security. Security is also operating random bag searches which may result in longer waiting times for entry.

A huge and wonderful place to explore, the castle has superb architecture and holds many different attractions within its walls. Make the most of your visit by taking advantage of complimentary guided tours and audio guides.

Edinburgh Castle is a massive castle complex which has a very long history. The fortress dominates the skyline of the city of Edinburgh. It is divided into several parts and they serve different purposes. 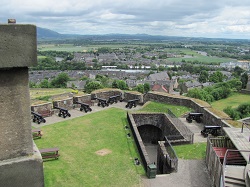 Located at the front of the castle and is now known as the esplanade where concerts are currently held. Laid out as a parade ground in 1753, it was extended in 1845.

Built after the Lang Siege on the orders of Regent Morton to replace the round Constable's Tower which was destroyed during the siege.

Located next to the Argyle Tower are largely occupied military buildings after the castle became a garrison in the early 18th century. 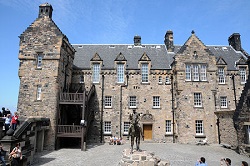 Located west of the Governor's House and part of the National Museums of Scotland, it was once known as the Scottish Services Museum and before that the Scottish Naval and Military Museum. 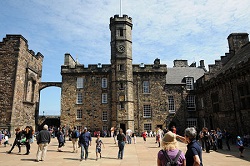 Also known as the Citadel, the Upper Ward occupies the highest point of Castle Rock. The eastern end of the Upper Ward is occupied by the Forewall and Half Moon Batteries. 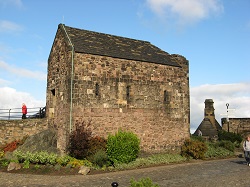 The oldest building in the castle and also in Scotland, St. Margaret's Chapel dates back to the reign of King David I. the chapel is dedicated to St. Margaret of Scotland. 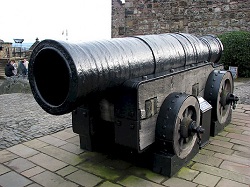 This 15th century siege gun us displayed on a terrace in front of St. Margaret's Chapel. It is also known as the great iron murderer called Muckle-Meg. 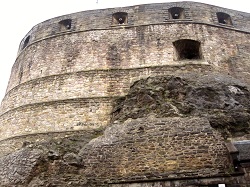 Half Moon Battery and David's Tower 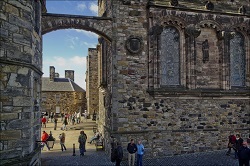 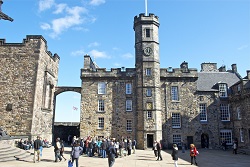 There are four royal apartments that make up the Royal Palace, which were the residence of the later Stewart monarchs. The building has been extensively remodeled for the visit of James VII to the castle in 1617. 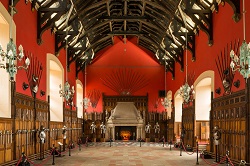 The chief place of state assemblies in the castle, the Great Hall was converted into a barracks for the troops of Oliver Cromwell during his seizure of the castle in 1650. 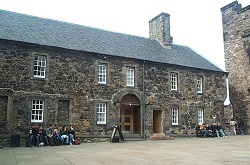 The Queen Anne Building housed the kitchens serving the nearby Great Hall and was later the site of the Royal Gunhouse.

How to Get to Edinburgh Castle?

There are many ways to get to Edinburgh Castle.

Waverley is the main station. The castle can be seen from the exits. From Princes Street, go to Waverley Bridge.
Haymarket Station is at the west of Princes Street.

Take the Airlink 100 express from the airport and stop at Waverley Bridge, near the main railway station. Travel time is about 25 minutes.

Edinburgh Castle is one of the most famous spots in Scotland, so it is only normal for it to be very busy.

The best way to avoid queues in the Castle is to pre-book your ticket and purchase skip-the-line tickets. This will guarantee a queue-free entrance, though you will not be able to skip the crowds on place. This is where choosing a good hour comes in very handy.

Guided tours are the worth it because they give you an in-depth experience of the castle and all the things that happened there since it was erected.

One of the castle's main highlights is the One o'clock Gun so make sure that you stay around for it. it happens every day, except Sunday. Just be prepared because visitor number is also highest during that time. Weekends attract the biggest crowds so choose a weekday for your visit.

How to Get the Most Out of Edinburgh Castle?

Edinburgh Castle has made a real effort to make access for all an important feature all throughout. The most challenging part for any wheelchair-bound person are the cobbles and the slopes. People with power wheelchairs will find it easier whereas people with manual wheelchairs will need strong arms or someone who can help push them. Some places which are unsuitable for wheelchair users are:

There are mobility vehicles available for visitors. This car takes visitors from the esplanade to the castle's highest point and back down at the end of their visit.

How Much Does it Cost to See Edinburgh Castle?

While Edinburgh Castle dominates the city's skyline, it is by no means the only attraction worth seeing. If you are in Edinburgh, there are plenty of other things to look forward to aside from the castle.

This supposedly haunted abode is just five-minute walk from the castle and is home to the grave of Edinburgh's most loyal dog and mascot, Greyfriars Bobby. Visitors can also stop by the grave of Thomas Riddell, said to have inspired author JK Rowling when naming her greatest villain, Voldemort, also known as Tom Riddle.

Situated just right next to the entrance to Edinburgh Castle, Camera Obscura and World of Illusions is the city's oldest purpose-built visitor attraction. Visitors can experience unique interactive exhibits which demonstrate aspects of optical illusions.

Located near the top of the Royal Mile is the imposing St. Giles' Cathedral with its very own crown spire. Entrance is free but you have to pay a little extra for a guided tour.

Just less than 10 minutes from the castle is the neoclassical Scottish National Gallery on The Mound. There are permanent and visiting exhibitions which include renowned works such as Claude Monet, Paul Cezanne, and Francis Bacon.

Just around the corner of the castle and less than five minutes on foot is the National Library of Scotland. It was opened in 1925 and is one of the country's biggest libraries.

Stretching between George IV Bridge and Grassmarket, Victoria Street is a charming winding street with cobblestones which may have been the inspiration of JK Rowling's Diagon Alley in the Harry Potter universe.

Edinburgh is a place bustling with history and culture and is definitely worth the travel. Whether you are traveling from a London and needs some time away from the city or if Edinburgh is really the highlight of your trip, the city will not disappoint. Pick up the Edinburgh attractions map to guide you along the way and check on some free things to do in Edinburgh. So many personalities in history is fond of the city and it is very easy to see why. It has a certain charm that stays with you, even when you are no longer there.

Buy a Rubik's Cube puzzle, the best Christmas present for anyone in the family.