In the wake of the coronavirus pandemic, we want to help you by sharing most of our commission revenue with you to boost Berlin travel economy. Check out 8% discount on Top-rated Berlin tourist attractions tickets & tours here: 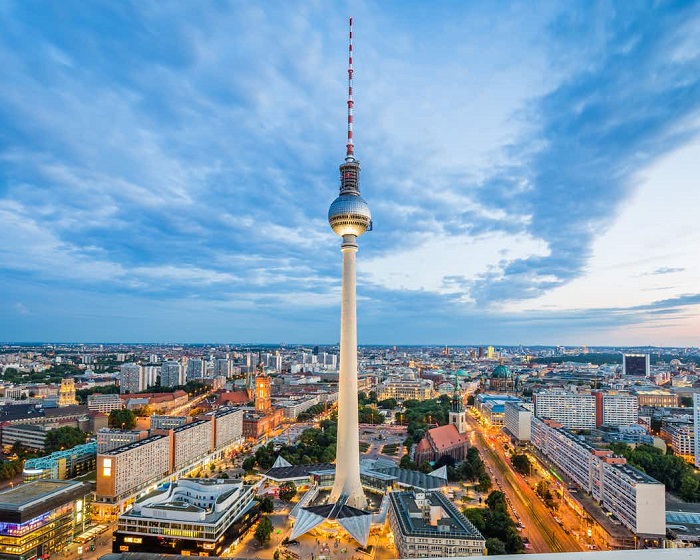 What are the best Berlin TV Tower restaurant Dinner & Skip the line tickets? 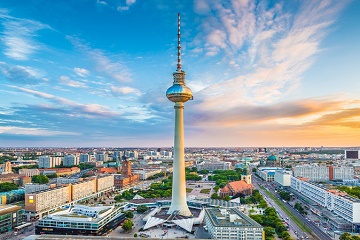 A chance to see Berlin's most famous landmarks, the Brandenburg Gate, the River Spree and more, from above.

A chance to see Berlin's most famous landmarks, the Brandenburg Gate, the River Spree and more, from above. 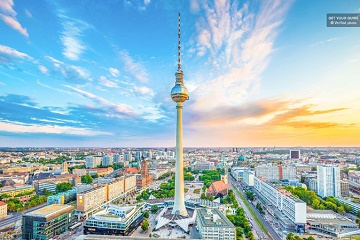 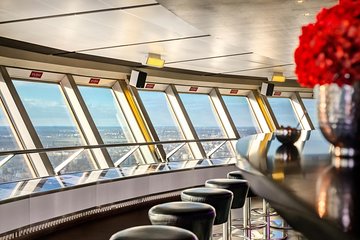 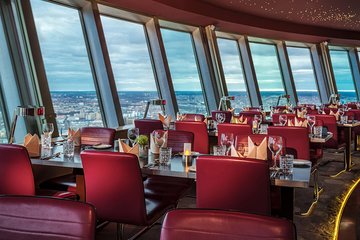 Everything about TV Tower in Berlin

They call it "that tower again" for a reason. You can see the Berlin Tower, also known as the Berliner Fernsehturm in German from anywhere in the city. Literally anywhere! While it was built to show the strength and superiority of East Germany's socialist society, the Berlin TV Tower is now an iconic symbol of Germany's capital. Standing stoic and tall at 368 metres high, it is often counted amongst the tallest buildings in Europe and makes for a great vantage point to capture unrestricted views of the city, especially during the golden hours of sunset.

In the early 1960s. Berlin was touted to get a television tower. The German Democratic Republic planned to build this new facility primarily for the broadcast of GDR television programmes. Alexanderplatz was chosen as the location, firstly because it was in the outskirts of the city and secondly due to financial constraints. It was installed by German architect Hermann Henselmann, who invented its characteristic form and in 4 years the tower was grandly completed in 1969. Did you know, the sphere on top of the tower symbolizes the Sputnik 1, the first satellite to orbit around the Earth?

The building - internally known as "Fernmeldeturm 32" - serves as a viewing tower with observation deck including a bar at a height of 203 metres, as well as a rotating restaurant. It is also a part of the World Federation of Great Towers, with other iconic towers like the Burj Khalifa, Busan Towers, Empire State Building and a lot more.

Standing 1,197 feet tall (368 meters) the Berliner Fernsehturm TV-Tower is the highest building in Berlin. It has a red and white antenna mast, almost 118 meters high which forms the crowning section of the TV Tower and adds to the overall height of 368 meters

If you're planning a visit to the Berlin TV Tower, here's what you can expect. Provided you have purchased your tickets online in advance, you can skip the winding long ticket lines and exchange your voucher for a pass and move on to the security lines directly. After the security line comes the elevator line where those with VIP tickets are given priority and functions on a first come first serve basis. The elevator ride in itself is quite epic as it takes just 40 seconds to reach 203 meters ie; 6 meters per second. On the ride up, you'll have an elevator attendant giving you a commentary in English and German. The ceiling of the elevator is glass which lets you watch yourself rush up the interior of the tower with great speed.

Once you step out of the elevator, you reach the Berlin TV Tower Observation deck located at a height of 203m. PS: It's at a height taller than the Eiffel Tower! Behold the entire city in front of me, with views stretching for miles and miles. From up here, you get a sense of just how big Berlin is.

As you move around the panoramic Observation Deck, informative signs placed strategically around the viewing deck point out various important landmarks that can be seen below you. Don't forget to spot the famous landmarks like the Reichstag, the Berliner Dom and Tempelhofer Feld. After you've had your eye's fill of Berlin, you can choose to leave the tower or move onto the rotating restaurant for a scrumptious meal. Note, you have to make reservations for the restaurant in advance as they sell out pretty fast.

12 Berlin TV Tower Facts You May Not Have Known!

The Berlin TV Tower remains open every day of the week. Timings are as below:

Opening hours of the restaurant: 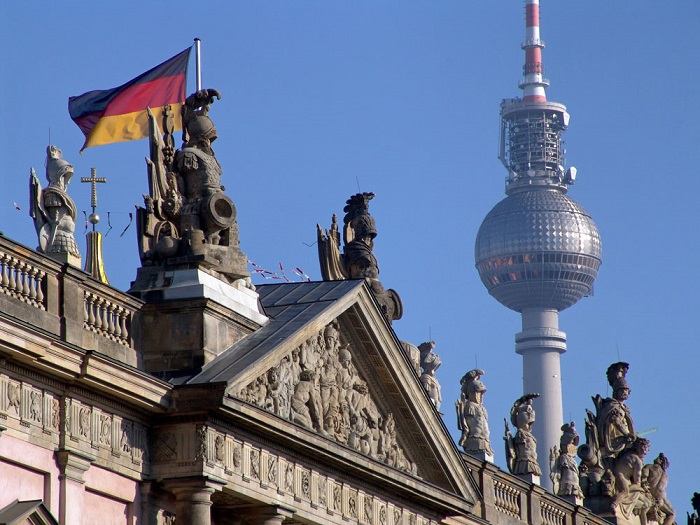 The Berlin TV Tower being one of the most popular ( the popular , in fact) attractions in Berlin, it is almost always crowded. It is best to book fast track entry tickets to avoid long queues. Make sure you keep a close eye on the weather forecast for clear skies and visit early morning when the light is soft. Mornings, around 9:00 AM sees the least queues so you can avoid paying a premium of skip the line tickets as well.

Another good time of the day for visiting the Berlin TV Tower is as the sun sets across the city. While Berlin is photogenic at any time of year, whether covered in snow, filled with spring or summer sunshine, or soaked in its beautiful autumnal colours ; the golden hours of the sunset add a touch of magic that is breathtakingly beautiful. Make sure you book a slot for these hours in advance as they sell out pretty quick.

Getting to Berlin TV Tower

The easiest and best way to reach the Berlin TV Tower is by public transport. The entrance to the Tower is directly opposite the Gontardstrasse exit of Alexanderplatz station.

You can catch either of the following to reach the Berlin TV Tower: 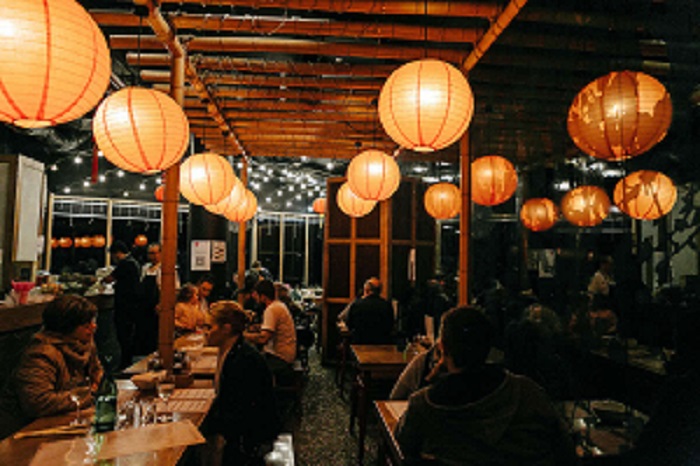 The Berlin TV Tower restaurant named "Restaurant Sphere" is a historic revolving restaurant, towering 207m above the city. Here, you can experience Germany's highest culinary tour and indulge in a refined Berlin cuisine from morning till night. The ambience is a mixture of modern design and retro chic with a "starry sky" on the ceiling and a musical accompaniment on the piano creating a very special flair. The rotating platform also includes an unforgettable 360 ° city tour.

As for the food served here, Tripadvisor displays a mixed set of reviews with some people strongly condemning the food and some who have found it worth their money. However, with a rating of 4 / 5 by over 2,311 visitors it does seem worth a try. They serve all meals - Breakfast, Lunch, Dinner, Brunch and have vegetarian and vegan options as well. Check out the menu to know more about all that they serve. Restaurant sphere also has a well stocked bar should you like to grab a drink to go with your meal. Note, there is NO dress code for the restaurant and smart casuals are welcome.

This is a higher end and more expensive menu and comes with : 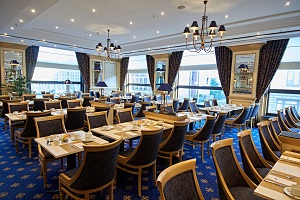 Seating in the restaurant is arranged in 2 circles ; window seating (best view and more expensive) and inner circle seating ( the 2nd row of tables on inside of the window seats). Tickets for both circles are available online and advanced reservation is a must.

Tickets often sell out months in advance, but should you plan in advance make sure to get the window seating. They are well worth the premium. Reservations include a flat fee and the meal costs over and above the reservation fee . The cost of this ticket also includes access to the viewing platform, one floor lower than the restaurant. This may work out a little expensive, but you can opt for the Beer & Boulette if you're looking for a more economical meal.

The ONE Grand Show Berlin Ticket