There are so many countless beaches in Greece which are exotic and superb. However, below is the list of the top 10 beaches in the island:- 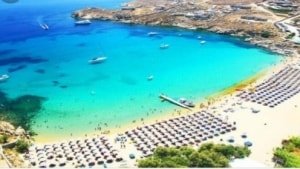 This beach has crystalline waters, golden sand and has a variety of multi-starred services. It can also be described as a vast, sandy bay with translucent turquoise water. This beach is worldwide known as the best in Aegean and has been ranked as one of the Greece beautiful places to visit. 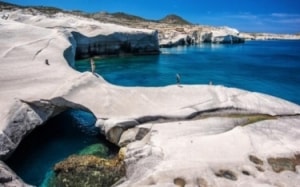 It is covered white milky white volcanic rock which is soft like chalk. On several occasions the winds and the waves the form intriguing shapes. It also has green waters which occasionally turn shade of blue as you approach its shores.

This beach is worldwide known for its stunning scenery and it's known as the islands trademark. It is covered with smooth white pebbles found under the towering sheers rocks. This attracts a thousand of tourists on daily basis who flock to come and see it. It also has emerald waters.

This is also a very famous beach that is tucked into Naoussa's bay. It has extremely gorgeous bluish green waters. It has smooth grayish like rocks that are chiseled into phantasmagorical shapes which are also interspersed with golden coves of different sizes. 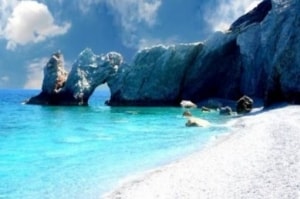 It has white sand and is surrounded by delicious bluish green waters. It has a classical environment making it ranked as one of the top most beaches in Greece top ten beaches. Recently, photos of this beach went viral and now attracting millions of people. 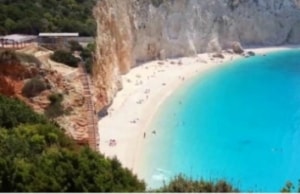 It is the most exotic beach in Greece. It is considered as the most finest in the Mediterranean Sea. It lies on the western side on Crete bordering Kissamo. It has pink and white sand glistens and blue green waters. The place has Venetian castle making it have the fairy tale scenery.

It is located at the foot of a gigantic white cliff that occasionally turns orange with the sunset. It is known as one of the beaches you could visit in the Mediterranean Sea.

It has white sculpted rocks, blue green waters as well as grottoes. One of the most outstanding beliefs about this beach is that they believe that whoever will be able to swim across that narrow opening of the rock tend to find the life time lover on the other side. 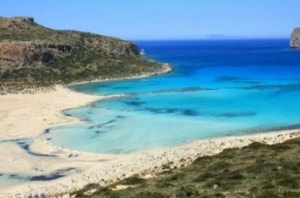 It is a breath taking beach found between Argostoli and Assos. It has white sand, blue waters at the foot of the high cliff as well as fine pebbles. It has been ranked among the most famous beaches in Greece because of its uniqueness. 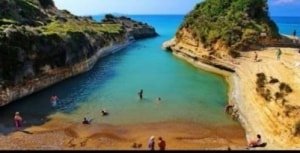 It has very clear waters which is great for diving in. It also has magical setting with sheer white cliffs, white sand and turquoise water. Several people visit this island with Panayiotis (a very old boat) and take snapshots as well as videos when on it. This made it very famous for the past years.

How long does it take to Ferry/ Aircraft from Athens to Santorini to Mykonos to Crete?

The best website to search for flights from Athens to Santorini is www.kayak.com . www.gtp.gr is the best place where you could get to find time and ferry routes. But if you want to book a ferry directly you go directly to the ferry's company website which is as follows:-

How expensive/Cost is it to go to Greece?

Below is the average daily cost/expense you can incur to visit Greece.

Pre-booking a hotel as early as possible is excellent as prices for hotels rarely go down. This is good because you will get a chance to stay in best rooms within the hotel. However, if you are looking for a business hotel, booking it on a weekend is good as they normally have discounts on weekends.

When you want to book a hotel, it is encouraged that you go for the highest rated ones. And once you do that, you need to contact the hotel directly and ask if they can beat the rates you found online. Then you need to send them an email to confirm your stay. In addition to that, you can request for other special offers too in advance.

Which are Best places to stay in Athens?

What is the most beautiful/best island in Greece?

What is the best area to stay in Santorini?

The best areas to stay in Santorini are Fira, Firostani, Pia and Imerovigli. These towns are located on Santorini cliff with a great view of volcano, caldera and sunset. Best hotels are within these four towns.

What is the best time of year / hottest month to go to Greece?

Below is the general average monthly temperature for the following islands in Greece.

What is the best area to stay in Santorini?

It is offers visitors with a combination of private luxurious accommodation with central locations at Fira. Some of the famous attraction near it includes Archaelogical Museum of Thira, Santorini Cable Car, The Castle of Skaros and Santorini Wines. 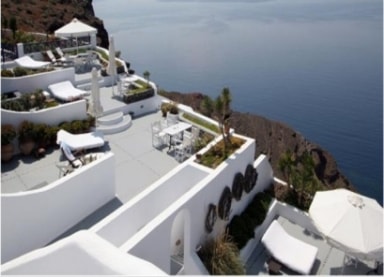 It is good for families. Other special offers in this hotel includes

Some of the nearest attractions near it include Santorini Port, Art Santorini , Museum of Prehistoric Thera, Ancient Thera, White Beach, Red Beach and Megaro Gyzi. 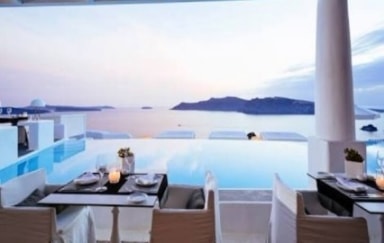 It is a 5 star hotel decorated with traditional architecture and multi-leveled terraces, perches from cliff and overlooking blue waters of Aegean Sea. Some of the attractions near it include Nam Midi Art Shop and Oia Treasures Art Gallery.

It is good for families as it provides a very peaceful base for visitors with good facilities and an outdoor pool area. Attraction near it includes Museum of Prehistoric Thera, Thira Art Gallery and Regional Health System Heath Care Centre of Thira.

Which Greek Island has the best nightlife?

What is the best time to travel to Santorini Greece?

The most appropriate and best time to travel in Greece is June or September. This is because during that period the weather is not too cold or too warm.

Ancient Corinth Half Day from Athens

from 62.00€
Ancient Corinth Half Day from Athens

from 100.00€
Mycenae and Epidaurus Day Tour from Athens

from 87.00€
Meteora Day Trip from Athens by Train

Athens to Hydra, Poros, And Aegina Full-Day Cruise With Lunch

Ancient Corinth Half Day from Athens